A start-up co-founded by a Knoxvillian who returned home to participate in the inaugural cohort of the “Innovation Crossroads” program at Oak Ridge National Laboratory (ORNL) has just reached an important milestone in its growth.

Active Energy Systems (AES), a cleantech company advancing an innovative cooling solution, has announced that it met the initial conditions for a first close on a $1 million seed funding round, led by Boston-based Clean Energy Venture Group. Other investors include Queen City Angels, based in Cincinnati, and Three Roots Capital, headquartered in deep West Knox County. For Three Roots, it is the second investment in Active Energy following an earlier one through the TennesSeed Fund that it manages (see 2019 teknovation.biz article here).

“We are excited to announce the initial close of Active Energy’s seed round, and we are so pleased to bring Clean Energy Venture Group (CEVG), Queen City Angels (QCA), and Three Roots Capital into our team,” the two Co-Founders said in a news release. They are Knoxville native Mitchell Ishmael, who serves as Chief Technology Officer, and Levon Atoyan, the start-up’s Chief Executive Officer (CEO).

“Over the next four months, we will secure final investment to complete this $1 million round, which will be used to file additional patent applications, further develop industrial collaborations, and strengthen Active Energy’s marketing,” they added.

Before this current investment, AES had raised more than $2.4 million in non-dilutive funding through Small Business Innovation Research grants from the Department of Energy and National Science Foundation, along with funds from the matching grant program that Launch Tennessee administers on behalf of the State of Tennessee. In addition to participating in the inaugural three-company cohort of the “Innovation Crossroads” program, AES also graduated from the “Energy Mentor Network” run by the Tennessee Advanced Energy Business Council in partnership with Launch Tennessee and is a current participant in the Spark Innovation Center at the University of Tennessee (UT) Research Park.

More recently, AES moved from the Fairview Technology Center to a new facility in Oak Ridge, choosing to remain in the region due to easy access to high-quality talent from UT and ORNL, low operating costs, and support from the local entrepreneurial and energy ecosystem.

We first spotlighted Ishmael in this March 2018 teknovation.biz article, some nine months after he arrived back home and began the two-year “Innovation Crossroads” program. 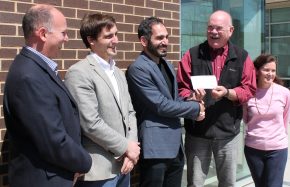 In the picture at the right, two of the three investors are represented. They are (left to right); Vanderhoofven, Ishmael, Atoyan, Bruck, and Carol Seamons, another Knoxville member of QCA. Representatives of each of the investors offered praise for the cleantech start-up.