The hybrid event drew around 150 people for the in-person option at The Mill & Mine in Downtown Knoxville and an unknown number thanks to the streaming provided by WATE-TV, the media partner for “Startup Day.” And, we were pleased to note that all of the winners have been spotlighted on several occasions each on teknovation.biz. 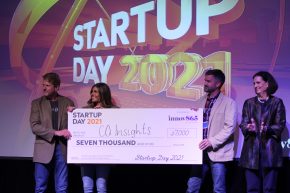 Ramshaw (far left) and the judges.

In the case of CQInsights, co-founded by Bruce Ramshaw, its Managing Partner, the selection was validation for his more than decade-long belief in the importance of assessment as an important way to transform healthcare and, in the process, improve patient outcomes and satisfaction while also reducing costs. The company is focused on using Continuous Quality Improvement (CQI) and was issued a utility patent for its approach to processing data to gain insights that are then shared in the company’s interactive data visualization tool named VALITY. 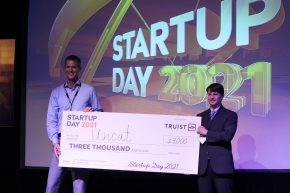 For Brandon Bruce, Co-Founder and Chief Executive Officer of Uncat, yesterday was a role reversal. He normally moderates the pitch event, but ceded the duties to the Knoxville Entrepreneur Center’s Chris McAdoo so he could pitch the new venture that is focused on solving a common problem that bookkeepers and accountants face – uncategorized expenses. Uncat was launched last November as a tool to reduce time and increase accuracy for users of QuickBooks (QB) Online. Bruce reported that the company has about 1,000 clients who have processed 35,000 transactions.

In the case of Malkes, the recognition comes after several decades being a part of the local entrepreneurial ecosystem. We met the engaging, passionate and forthright former resident of Detroit during our tenure as Director of Partnerships at Oak Ridge National Laboratory (ORNL) when he and Vig Sherrill, the two Co-Founders of a start-up that was known at the time as Aldis, were negotiating a license for lab technology. The venture, which rebranded as GRIDSMART Technologies Inc., was their third collaboration. In 2019, San Diego-based Cubic Corporation acquired the Hardin Valley enterprise, and Malkes left eight months later. 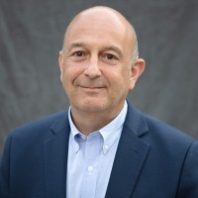 After taking time to decide what was next, he found another passion and cause that met his expectations, becoming Chief Executive Officer of NellOne Therapeutics Inc. in March 2020. Ironically, that more than decade old venture also has ties to ORNL. In a blogpost explaining his decision, Malkes wrote, “Indeed, there has been no shortage of opportunities. Through all the conversation, there was always a calling still looking to be satisfied. I knew that if I was going to take on another project then it had to fit some very specific criteria.”

He continued, writing: “So, if you’ve asked me what is next, let it be known that changing the world is what is next. This (NellOne) is bigger than any one person. Because it changes lives. Because it lets me be a servant leader. And because that NELL1 talented protein can only succeed if NellOne the company delivers on its promise. I answer to a higher calling and greater mission. I believe NellOne is where I am commanded to be.”

Malkes shared his thoughts on his own entrepreneurial journey and the local ecosystem in this April “Entrepreneurial Legends” article in teknovation.biz.

Judges for yesterday’s event were: (1) Sue Malone, Founder of Strategies For Small Business, who loves the region and flies in from California every year for the event; (2) Jordan Mollenhour, Co-Founder of Mollenhour Gross LLC; and (3) Tricia Martinez, Managing Director of the new “Techstars Industries of the Future Accelerator.”

Other pitch competitors, in alphabetical order, were: