Hosted by the Procurement Technical Assistance Program (PTAC) in the University of Tennessee’s Center for Industrial Services, the webinar featured Jim Greenwood, a long-time consultant on SBIR and STTR applications, along with: (1) Eileen Chant, Outreach Manager in the Office of SBIR/STTR Programs in the U.S. Department of Energy (DOE); and (2) Matt Willis, Director of the Army Prize Competitions and Army Applied SBIR Program in the Department of Defense (DoD). The latter federal agency accounts for more than one-half of the annual allocation of SBIR and STTR funding, while DOE ranks third at roughly one-sixth of DoD’s level. 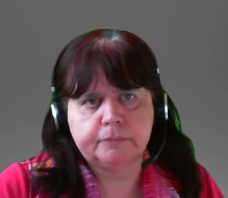 As regular readers of teknovation.biz know, East Tennessee start-ups have led the Volunteer State in capturing their share of the $3.5 billion in federal monies available each year that are a critical source of undiluted capital and an important tool to advance early stage, high risk technologies. The region has also been most successful in leveraging a state-funded matching program administered by Launch Tennessee through its contract with the Tennessee Department of Economic and Community Development. 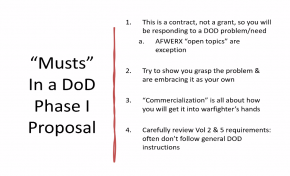 Greenwood, who Bangs said had been involved in the SBIR and STTR programs for nearly four decades, offered attendees some simply stated but cogent advice. “Follow the instructions,” he said. “It seems so obvious.” He also provided a slide (seen at left) of “musts” in a DoD proposal.

Because of the energy focus for many local start-ups, we took particular interest in Chant’s overview of DOE’s SBIR and STTR programs.

“I’m a newbie,” she told attendees, noting that she had been with DOE for about a year. Her LinkedIn profile shows a 25-year career in industry before joining the federal agency.

Noting that DOE selects 350 to 400 awardees annually for Phase I grants, Chant explained that “we are in the middle of an application cycle.” The remaining opportunities in CY22 will be Release 1 that will occur on July 11 and Release 2 that will be announced November 7. The former, for which applications will be due October 11, will involve four offices within DOE – Office of Advanced Scientific Computing Research, Office of Basic Energy Sciences, Office of Biological and Environmental Research, and Office of Nuclear Physics. 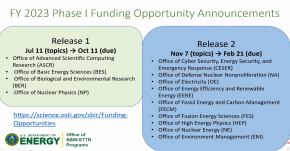 “Up to nine offices will be involved” in Release 2, she said. Those offices are listed on the slide at right that Chant showed yesterday.

She also noted that there is an emphasis on “socially and economically disadvantaged small businesses” that included those founded by women. In his comments later, Greenwood took note of this new emphasis.