Sybil Bailey is a native Knoxvillian. She’s married. She has cats. She’s happy. And she’s most proud of her reputation.

“I think the older I get the more mellow I am. So my impact is mostly warm,” she said.

Warm is how you feel in her presence, and her suite. Bailey is the owner and founder of afromermaid skincare, based at Sola Salons in Bearden.

“I wish there was some kind of secret to the name,” she said. “But I like afros. And I like mermaids.”

“I’ve loved it all my life. Back in college when we would have slumber parties, I was the person that always did facials or pedicures or manicures,” she said.

Even then, Bailey knew she wanted to make that love into her career.

“When I graduated high school, I wanted to go to beauty school, but back then everybody around me said that’s not a real career,” said Bailey. “So I went to college, and I got about 80 percent of a journalism degree. Never finished.”

That didn’t stop her from getting some cool jobs, ranging from working in an art gallery to a plastic surgeon’s office, and eventually at the Scripps Network.

“It was a great job. It paid great and the people were great. But then the company got purchased,” said Bailey.

When Scripps merged with Discovery, which has since merged with Warner Brothers, Bailey thought it was time for a change for her, too.

“My husband asked, ‘what would you do if you could do anything?’ So at 50 years old, I was in beauty school,” said Bailey. “It was fun. It was hard. But it was what I wanted to do for 35 years and never really got around to it.”

She’s proof that age is just a number, and as much as she loathed this upcoming phrase, she’s learning that if you do what you love, you don’t work a day in your life.

“I cannot believe that I come in here every day and pop pimples and dermaplane and chemical peel and make people look and feel better,” she said.

Bailey opened afromermaid skincare in January 2020 and promptly shut down two months later. This is where the reputation she’s proud of proves its power. 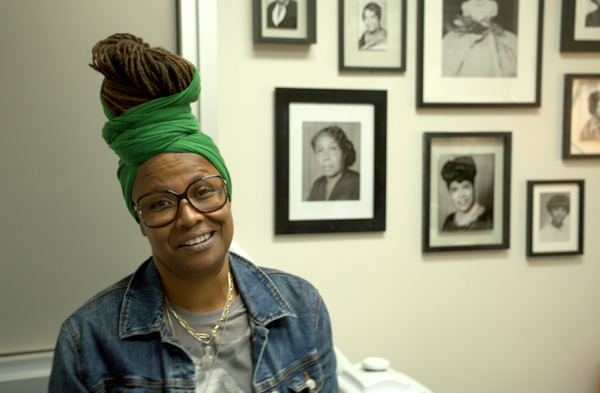 “Just in those three months, people I knew, friends and family, bought gift cards over COVID so I could pay my rent,” said Bailey.

It was because those people believed in her, and her client base grew.

And as afromermaid grew, leaders in the Knoxville entrepreneurship world noticed.

“I thought that it was a great initiative. I believe in it. And I thought it would be helpful and it absolutely was,” said Bailey.

She said the five-week mentorship program was a whirlwind but helped her recognize her strengths and weaknesses as a business owner.

“Tanika Harper and Damon Rawls were some of my mentors. Those are people who have experience in the community and building things, and they kind of kept me from making some of the mistakes that they have made,” said Bailey. “So I hate to say I stumbled around and the right people caught me, but that’s kind of how it’s been.”

Since finishing the 100Knoxville program, Bailey’s encouraged other Black entrepreneurs to apply.

“This is going to sound so hokey, but I think that we spend so much time thinking of reasons and telling ourselves why we can’t instead of just trying,” said Bailey. “You never know who is out there willing to help you. It is shocking to me how many people came together for that program.”

Because with the right people, attitude, and reputation, it’s never too late to take your passion full-time.