If there’s one thing Alexis Alsup knows very well, it’s how to help birth a baby.

“Over 23 births thus far,” Alsup said. Twenty-five if you count the two kids she gave birth to herself.

Alsup is a doula. She owns Empowered Doula Services and is the co-founder of the Knoxville Black Doula Collective.

“A doula is a person who supports families physically, emotionally, and informatively. So pretty much what we’re doing is we’re there continuous during pregnancy, we come at birth, and we help postpartum,” said Alsup.

Alsup became a doula in 2020. She left her job as the manager of a local Bojangles restaurant to finally pursue her passion full-time. Being a doula is something she’s wanted to do for years.

“It’s always been a passion of mine that I knew I was going to be doing, I just didn’t know when. My own experience really, really cultivated me like,” she said. “I want to do this for other families, for other moms.”

Alsup had a doula for both of her children. “I just wanted that support person at the time. I had children very young, so it was the right thing for me. And I’m glad that I made that decision.”

She’s always found birth fascinating and empowering. That’s how she chose the name for her business.

“I chose empowered because I felt empowered. And birth is just an empowering thing,” said Alsup. “Women are incredible. And so I felt like empowered was just the right name for my business because that’s exactly what I’m doing. I’m empowering families.” 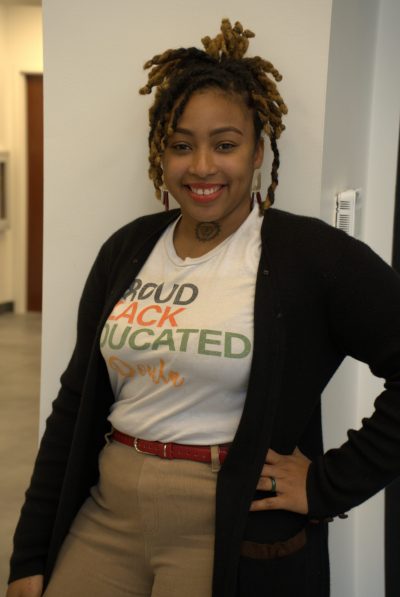 Her empowerment comes in the form of emotional support and vital information.

“We’re here to educate you on any questions you may have that’s related to your pregnancy, or even things probably not related to it,” said Alsup. “If you’re just having a bad day, we’re that emotional support person or that go-to. So I will say just having a doula there to inform you on things, and be that huge support person just changes everything.”

In an effort to grow her business, Alsup applied and was accepted into Cohort 5 of 100Knoxville, which is an initiative to help double the revenue of local Black-owned businesses through the investment of time, talent, and access to social, political, and financial capital. 100Knoxville’s goal is to help Black-owned businesses in Knoxville grow by $10,000,000 in five years.

Alsup said she was shocked and excited to be accepted into the program.

“They continuously make opportunities for small businesses in Knoxville, and I feel like there’s a very huge need for it, especially for small black businesses. There are not a lot of them,” said Alsup. “So it really moved me when I went in to meet the other people that were part of the cohort and they were just like me.”

She and her four cohort members spent five weeks with different mentors and speakers to learn how to best grow their businesses. During that process, Alsup was also studying to expand her services.

Alsup is training to be a midwife, which means she’ll be able to deliver babies, not just be there for emotional support. She hopes by expanding her services she can help more families.

“The reason why I got into birth work is because I really wanted to fight against those health disparities and really make a difference and an effective change in my community,” said Alsup. “So I feel like me becoming a midwife will do a lot more. As a doula, we can’t do anything medical, so it kind of limits that and I’m ready to be there to do more hands-on.”

Alsup is one of few Black doulas in Knoxville, and will soon be one of even fewer Black midwives in the area.

Through the Knoxville Black Doula Collective, she hosts community events like breastfeeding workshops and other opportunities for expectant mothers to get information on their birth options.

Alsup hopes she can continue to serve as an example and a resource.

“If you are an inspiring doula out there, I’m here for you. I do give one-on-one courses on how to become a doula and what steps to take because in the beginning, I did not know anything.”

But now she’s helping families grow stronger, one birth at a time.